Turn the clock back to 1961 and beyond. Roam those old dirt roads once more and visit friendly neighbours you knew so well. From its beginnings before 1930 to its dismantlement in 1961, making way for the Squaw Rapids Hydro-electric Dam, to the day in 1962 when the river rose and water erased footprints forever, there's a lot to remember and to comment on. 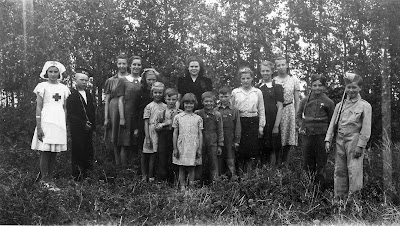 The theme of this interesting picture, taken behind the school on the north side of the Tote Road (at the top of the hill where the kids used to slide down), was the Second World War and the contribution that local Canadians were making overseas. The play may have been penned by Miss Leitz. Madeline, who played the part of the nurse, remembers that the school was overly warm during the performance, and that she unfortunately fainted. At the time, some of her classmates felt it was funny that it was the "nurse" who became ill and required attention. It can now be added that the nurse from the school play went on to spend a long and dedicated career in nursing in Windsor, Ontario. Miss Leitz obviously chose well.